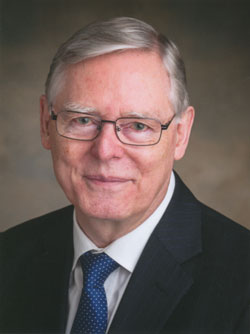 My scientific life began in 1961 at the Department of Medical Chemistry, with a PhD project that aimed at searching for protein‑bound phosphohistidine in mammalian tissues. This kind of histidine modification was unknown at that time, but a year later Paul D. Boyer et al. at the University of Minnesota reported the isolation of phosphohistidine from bovine liver mitochondria. Eventually they identified this phosphoamino acid as the 3‑phosphohistidine isomer, using methods that became important in my own work.

The rapid‑mixing equipment, which I had designed, was also used in studies of the intermediary phosphorylation of sodium-potassium ATPase, a project further developed by Sven Mårdh.

In the early 1970s Lorentz Engström, together with most of his research group, switched to the study of proteins phosphorylated by cyclic AMP-dependent protein kinase (PKA). This was how the well-known regulatory phosphorylation of liver pyruvate kinase was discovered. This phosphorylation occurs as a consequence of the hormonal stimulation of the gluconeogenesis in liver during starvation. Further studies in which I participated led to the first identification of a consensus amino acid sequence around the phosphorylatable serine of a PKA‑substrate. These studies, and several that followed, benefited greatly from collaboration with Ulf Ragnarsson at the Department of Biochemistry on the synthesis and characterization of a large number of phosphorylatable peptides.

For a protein phosphorylation to be regulatory it must be reversible, which requires the action of a protein phosphatase. This aspect was studied in collaboration with Vincent Titanji, then a PhD student at my laboratory. My long‑standing contact with him and some of his students to support their studies on tropical parasites in Cameroon led to an extensive correspondence that was recently filed in the IMBIM archive.

Around 1980 I found it worthwhile to switch focus and I chose to investigate the possible existence of enzymes that could modify phosphorylated sites by other processes than dephosphorylation. This search was initiated by adding a set of 32P-phosphorylated peptides of varied length to rat liver extracts, and led to the discovery of tripeptidyl peptidase II. The initial characterization of the enzyme was performed with Ros-Mari Bålöw. The project was then taken over by Birgitta Tomkinson, who developed it extensively and successfully.

During the first years of the 1990s I made an attempt with Johan Rosén to look for additional modifications of phosphopeptides, which led to the rediscovery of prolyl endopeptidase and the discovery of its preference for a phosphorylated substrate.

After arranging a Wenner‑Gren International Symposium on protein phosphorylation in September 1997 in honour of Lorentz Engström and as I was approaching my formal retirement in 2002, I ventured to return to the phosphohistidine field. The studies on the histidine phosphorylation of the bacterial phosphoenolpyruvate‑dependent phosphotransferase system and two‑component systems had become extensive at that time, while the progress of the studies on phosphohistidine in mammalian cells had been slower. By joint efforts with Gunilla Pettersson and by use of a phosphohistidine‑containing peptide as a probe, we succeeded in discovering a 14‑kDa phosphohistidine phosphatase (PHPT1) in porcine liver. The further characterization of this enzyme was performed through an invaluable collaboration with Pia Ek, who became the principal investigator of the project. The successful expression of the recombinant human enzyme was made possible by support from Jin-Ping Li. PHPT1 has proved to be a valuable tool in phosphohistidine research. Our first report on the enzyme was published in 2002. A brief review can be found in the introduction of our most recent paper (1).

In this context it should be mentioned that discovery of the same enzyme was independently reported in 2002 by Susanne Klumpp and her group in Münster. Sadly, Dr Klumpp died in 2009, which was a great loss for all of us investigating this enzyme.

I hope to be able to conclude my scientific activity by following the research on phosphohistidine in mammalian cells for some time to come. There now seems to be a gradually increasing interest in this field, due to its possible relevance in understanding part of the metabolism of cancer cells. In addition, recent adaptations of phosphoproteomic methods for detection of protein-bound phosphohistidine give hope for the future.